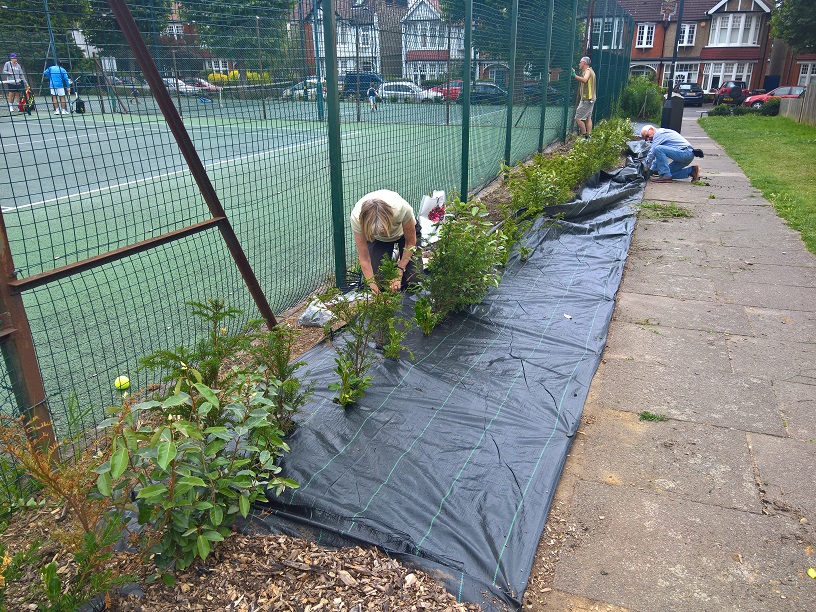 Thanks to all who pitched in for another successful Work Day. We had 5 Enfield Conservation Volunteers, and at least a dozen others! Here are some of the things we got done…

• It took 7 workers to re-weed the new hedge that had not had the weed control fabric put down a month ago – and THEN we did the fabric – which also took ages!! But now it’s all secure, with topping done today by David (and a bit of spreading by me).
• The mountain of soil was moved so that we now have a lovely bed to plant by the side of Court 5.
• The jungle was reduced back to its roots in the dell (behind Court 5), and there are now 5 holes dug and covered for future fruit tree planting – important that we keep these weed free until the autumn (!).
• More of the hedge has been trimmed back – thanks to Gary alone for this one!
• Some shrubs were cut back round the pond.
There are still loads of jobs to be done if anyone fancies doing some more hedge-trimming! In the autumn it will have a big cutback with our soon-to-be-acquired electric shears. We’ll also look at cutting back the bull-rushes at some time.

Meanwhile, the water-lilies are doing a great job and probably helping the barley booms as they cover more of the pond and cut the light down.

Many thanks to all who came as everyone did a great job and the park is looking wonderful. We’ll let you know when we are having another workday!