Or, how the moorhens saved the Rec and came to be our mascot. By founding chair Ilona Jesnick

Conway pond existed long before the roads and the houses that now surround it. For many years Enfield Council looked after it, draining it annually and cleaning out the silt resulting from the regular fall of oak leaves. Over the years, people threw things in: bulrushes, which had to be dredged out; several large koi carp which suffocated one hot summer when the water level fell too low; waterlilies. These were a success; everyone enjoyed the beautiful white flowers.

A pair of moorhens moved in and nested. Every summer tiny moorhen chicks trotted across the lily pads on their outsize green feet. Meanwhile the Council had stopped draining the pond. The waterlilies grew until they threatened to take over.

Then the pond flooded twice; the old drains and culverts serving the outflow were mended by the Council and in 2010 they came to drain and clean out the pond. It took some perseverance to persuade the Council that the disappearance of the pond edging and half of a tennis court was due to more than hillside streams. Eventually, the pond was emptied and cleaned, and a collapsed exit channel was repaired.

The Council worked extremely thoroughly, removing all the lilies and our tiny stickleback fish. The spring-fed pond soon refilled and we hoped that some of the waterlilies would be returned, but crossed wires left us with a stretch of totally barren dark water. In addition, some temporary patching of the edging with rough pieces of concrete pavement began to crumble, leaving it ugly and unsafe.

The resilience of moorhens 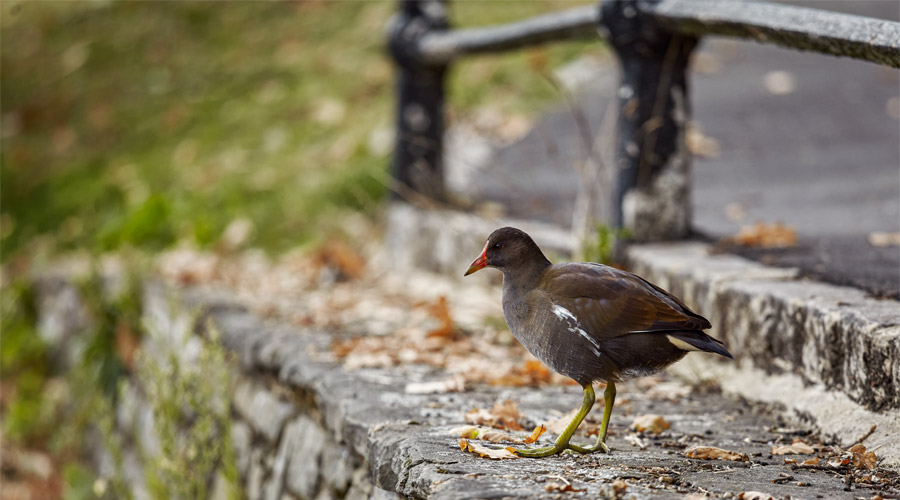 The moorhens, meanwhile, had spent the winter out of the pond and returned to the water in early spring already mated and eager to nest. I happened to be in the Rec watching the puzzled and desperate moorhens paddling round and round searching for somewhere to land in vain.

But moorhens are resilient and determined.

There happened to be a large branch of oak fallen in the water from a recent lopping, leaning right up against the stone edge. They swam up to it several times, and swam away – it wasn’t a safe position for a nest. That day there was a man from Parks in the pond clearing up the debris from the oak cutting and he was about to remove the log when I explained the moorhens’ plight and asked if he could instead drag it away from the edge. He kindly dragged the log out towards the centre, safe from foxes and people, turning it so one flat projection, the size of a small dinner plate, was clear of the water.

In seconds one moorhen had jumped onto the tiny area and settled down. They took turns, one sitting on the log while the other searched the pond from end to end for nesting material. Failing lily pads, they collected plastic cold meat wrappings, which they layered with slivers of cardboard, sweet wrappers, leaves, discarded till receipts, even drinking straws floating on the water. Because the Rec was largely neglected, the litter that was a problem for residents was a godsend for the birds that year.

People threw handfuls of dried grass and stalks into the water for nesting material. Amazingly, the moorhens built a big solid nest and hatched a brood of five chicks. Every visitor to the Rec was cheering them on.

The newly hatched chicks could only get out of the water by clambering back into the nest, but some guardian angel created a stairway of salvaged crazy paving for them and they all survived. The log remains in the pond, at the end of the island closest to the tennis club house.

The Friends of Conway Rec formed in the latter part of 2010 to care for the Rec and to keep the moorhens going. Formally recognised by Enfield Council the same year, we set about immediately improving the pond with lilies to replace the old lily pad grove and rushes for the moorhens to hide in.

Since then, the group has worked closely with the Council’s Parks Team to restore what had become a somewhat neglected public space.

In difficult economic times for public services, the Friends tried to find other ways of resourcing necessary work too. With the moral support of the Parks Team, we secured a grant from Biffa, the waste and recycling company. Our ‘Biffaward’ of around £5000 allowed the pond edge to be rebuilt, using recycled Yorkstone paving; trees, shrubs, bulbs and water plants to be bought and established; and small islands to be built and planted to provide refuge and nesting areas for water birds.

But tragedy struck when one of the moorhen pair went missing – we later learned it had been found dead in a nearby garden. Because the male is more aggressive than the female we assumed the remaining bird was the widow. Then, as the Friends were working in the Rec on pond improvements, sad that there would be no chicks that year, quite miraculously another moorhen fluttered down from the sky to join the widow on a newly installed planter and became her consort. The moorhen life cycle began again.

Today the moorhens thrive; in normal summers they hatch 4 broods in a season, of 5-6 chicks each. They fly away as they grow up and eventually only the last few stay on the pond in the autumn with their parents.

Conway Rec without the moorhens would be a very different place, so they became our mascot.