Once a piece of problem swampland when housing was first built here over a century ago, this piece of parkland has had a long and varied history – not to mention the notorious ‘Beast of Conway Pond’…

Why was this piece of land left when houses were being built over 100 years ago?

The pond in the ‘open space’ was the real problem in 1904 when house-building began in our area. A road that could have joined Conway to Cannon Road was abandoned and the land developers sold off all the other building sites in Conway Road and Cannon Road, but left the swampy area alone. It could not be filled in because of some rules about water rights.

The swampy pond originally stretched in a ‘tail’ behind the tennis courts and houses on Conway Road and it was not fully drained and contained in its present state until 1926. The Developer, the British Land Company (BLC), was not keen to do anything about it apart from sell it to the Council at a rock-bottom price and divest itself of the problem.

The Council had no enthusiasm for taking on responsibility for this foul-smelling site. The wrangling went on for years! It produced some very colourful debates in the council and bargaining with the BLC. Central to the debates and support for the purchase was Councillor Thomas Melville (pictured).

When did they build the Causeway and drain the swamp?

The Council had been pressed by local residents to buy the land and create a footpath across the ‘swamp’; a petition of 110 residents from Conway, Harlech and Ulleswater Roads was presented. In 1914 the final purchase of the Open Space was made. In 1915 the causeway path between Conway and Cannon Roads was constructed over the swamp, but the long tail of the swamp remained for another decade.

Why was there only a footpath to Cannon Road and not to Selborne Road as well?

The residents of Conway Road and Cannon Road eventually benefitted from the construction of two pathways across the park.

However, an effort was made to buy sufficient land from the builder of Selborne Road in order to construct another path across the open space. The Council had negotiated in 1913 to sell him some of the land but the Developer (the British Land Company) would not agree to this! Perhaps it was in a fit of pique that the builder refused to sell any land to the Council if he could not have any frontage on Conway Road. A petition of 61 residents did not help.

The only lucky ones were those in Selborne Road who backed on to the park as they were officially allowed to put gates in the fence at a charge of £1pa in 1932. Al least it saved the park from any more house building and left us with a decent sized space for us all to enjoy.

Has it always been a recreation ground?

Soon after the open space was purchased, it became necessary to use much of the land for allotments: about 1.5 acres were turned into 19 allotment gardens to support the war effort in 1916. There was enough room to grow a substantial amount of potatoes, as well as other fruit and vegetables, to reduce imports of grain from overseas.

In the Second World War once again allotments were made but on much less ground this time, as the tennis club had taken up much of the flat land. Two allotments were set up on the land below Cannon Road (now Court 5), and several more on the slope beyond Court 4. 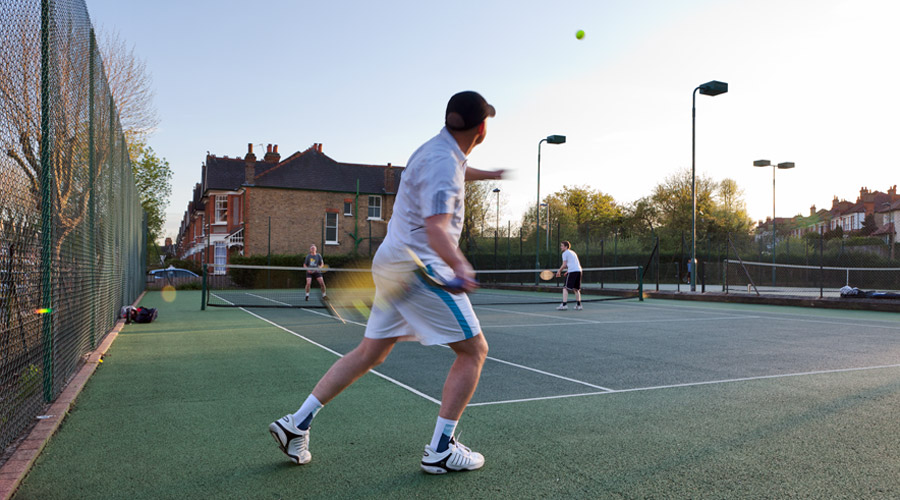 When did the tennis club start?

In the 1920s, after the war was long over, the popularity of tennis led to a new Conway Road Lawn Tennis Club leasing the level land. On the 26th January 1926 The Parks Committee instructed the surveyor to proceed with the construction of 2 hard tennis courts and 3 grass tennis courts in The Conway Road Garden at an estimated cost of £490. A small hut was erected for the mowing machines and later in the year the Council agreed to erect a Pavilion for the Club.

Are there any good stories about the creation of this parkland?

Well there is the story of The Beast of Conway Pond! In June 1911 a Conway Road resident met The Recorder’s Gossip column writer in the City. “I say,” he said breathlessly, “have you got all about that sea-lion, or something of the kind, that is frightening everybody about Conway and Cannon Roads?” The Recorder had not.

“My dear fellow,” he exclaimed, “I should have thought you would have columns about it. Three or four hundred people have been up to the pond every night to see this mysterious animal, which kicks up such a row that people cannot sleep, and babies cry with fright. I know it’s true,” he said, “because I live close at hand, and it has been quite a big event to see the crowds go up to watch this animal disporting itself and to hear it make the most awful noises you have ever heard.”

The local reporter had heard the rumours, but had not sent the story to the editor for fear of disturbing the remaining residents of the area. He wrote: “The good people living in the neighbourhood of a stagnant pond in Palmers Green were surprised and startled out of their sleep by the ominous bellows of some fearsome creature living in the water… People were afraid to go to bed at nights… and fixed watchful eyes on the swamp wherefrom the awful noises emanated. But they saw nothing.

“At last a workman, having heard the widespread rumour of a rare animal which made an awful noise living in the swamp, went on a hunting expedition, and to his surprise and delight came face to face with The Beast of Conway Pond – an American bull-frog of the Rana pipiens species. This ‘terrible’ creature is said to be six - eight inches long and three to four inches broad.”